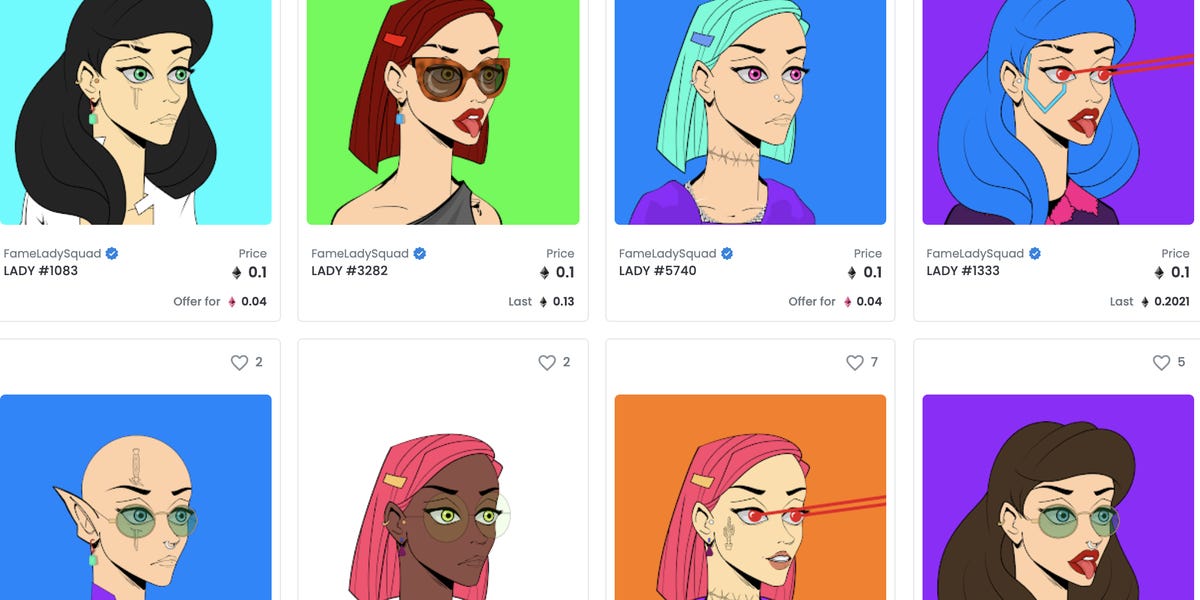 An “all-female” NFT project dropped earlier this month, but it was later revealed to have been founded by three Russian men.

An NFT is a non-fungible token — a unit of data whose authenticity and ownership are tracked through a decentralized network. Even if an NFT is screenshotted or saved, the original owner can be verified. In the last year, NFTs have skyrocketed in popularity as a way for artists and art collectors to better secure the authenticity of pieces of digital art.

The Fame Lady Squad (FLS) NFT project was advertised as the “first female avatar project of all time.” People could buy images (called “ladies”) that were produced for the project as NFTs, which could then be used to represent users on various social media platforms. It spurred $1.5 million of investment into the 8,888 individual NFTs, Chris Stokel-Walker reported for Input Mag.

The FLS website listed team members from the US and Norway with feminine names and avatars.

The FLS Twitter account, which has now been deleted, also posted a thread where it apologized and listed Rand, D Mefi, and one more developer who was not named, as the three founders, and said they were all men.

“It doesn’t mean that it is a scam or a fraud. We love NFT community and everything that is related to NFTs,” the account said.

Prices for the NFTs sank on the secondary marketplace OpenSea after owners began panic-selling, Decrypt reported. A digital art collector called “digitalartchick” tweeted that the floor price had “tanked 90%”.

Buyers of FLS and onlookers started calling for the founders to transfer the ownership of FLS’ smart contract to respected women in the NFT space. A smart contract is a program that automates and documents elements of an NFT’s transactions. Whoever has the smart contract can get money when NFTs are traded and resold.

The FLS founders conducted a poll on their Twitter account, asking the NFT community about whether they should give the smart contract away. Over three quarters of respondents voted yes, after which FLS said they transferred the smart contract to “digitalartchick,” who is a prominent personality in the space and suggested the transfer on Twitter. She tweeted sceenshots of what she said was a conversation with the founders. Digitalartchick did not respond to a request for comment.

She then said she passed it on to a team of women who are active in the community as NFT collectors: Bored Becky, who is a realtor in Canada called Ashley Smith, and NFTignition, whose real name is Danielle Davis.

Davis told Insider her team received the contract and it was a “huge surprise.”

She said the situation could have been a “huge stain” on the history of NFTs, but it’s turned into an opportunity.

“This is definitely historic as it is the first time that an entire project has ever been given to the community,” she said.

There is no public record of NFT transfers, but Davis and Smith are both active members of the NFT community who have posted videos and images to prove their identities in the new FLS server.

On August 12, the Fame Lady Squad founders said they would give Project Phoenix control of their social media accounts too. The floor price of the NFTs on OpenSea is now 0.08 ethereum ($268).

Fame Lady Squad is set to relaunch on August 24.

For more stories like this, check out coverage from Insider’s Digital Culture team here.