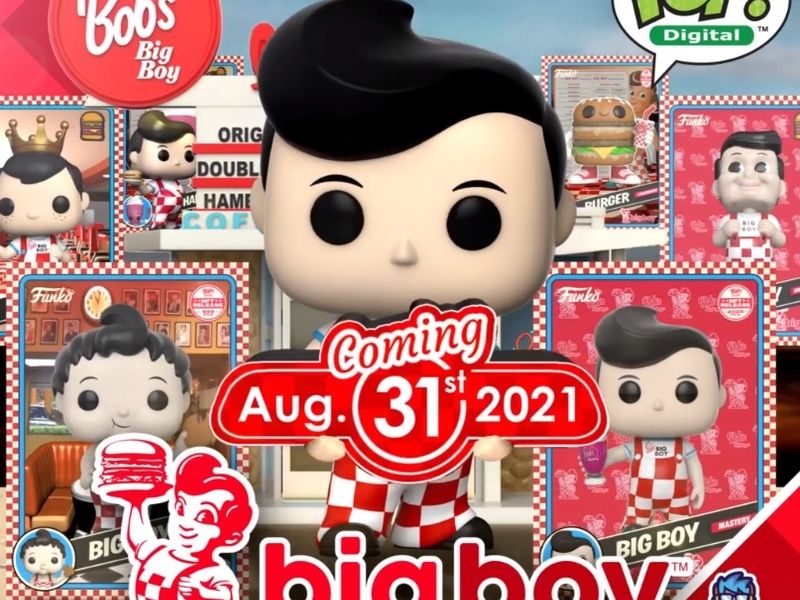 For the past couple of years, Southfield-based Big Boy Restaurant Group LLC has worked to revive its business by rebranding and remodeling restaurants across the country.

Key to that objective has been its attempt to resonate with a younger audience, the company has said. What better way than to jump aboard the NFT blockchain bandwagon?

Big Boy is scheduled to launch a release of NFTs (non-fungible tokens) on Aug. 31, the company announced Wednesday. The digital collectibles will be created by Everett, Wash.-based toy maker Funko Inc. and available for purchase via the Worldwide Asset Exchange, a blockchain platform for buying and selling digital tokens.

It seems a bit hipster tech for an 85-year-old brand, but that’s by design, said Patrick Blake, marketing manager for Big Boy.

“Instead of always being a step behind, this is us staying current with the times — to be the very first restaurant with its own collection of NFTs,” Blake said. “It’s something that we’re going to be able to get out there to a younger demographic.”

The popularity of NFTs has exploded in the past year, with everyone from professional athletes, such as Detroit Tigers outfielder Akil Baddoo, and celebrities, including local rapper Eminem, launching their own versions. NFTs were created in 2014 with little hype, but in the past three years, around $175 million has been spent on them, according to Forbes.

While NFTs have been said to be the eventual replacement of traditional trading cards, the extent of their popularity remains to be seen. In the case of the restaurant industry, they probably won’t be the modern-day Happy Meal toy, because rarity is a key feature.

NFTs are digital assets that represent real items — anything from artwork to cards and tickets, or now, the iconic Big Boy mascot. Each has a unique digital signature distinguishing it from other digital assets. NFTs are typically one of a kind or rolled out in small quantities, keeping the asset scarce, and theoretically, the value high. They are also typically bought and sold on a blockchain, which is a public ledger that records transactions.

Basically, an NFT is a digital collectible that can be easily authenticated in a wild internet world full of knockoff GIFs and stolen memes.

A select few packs will include tokens that can be redeemed for physical figurines, including a first edition Big Boy with the original mascot design.

Big Boy first partnered with Funko in 2005 to launch the company’s first Pop collectible. Blake said the NFT is a natural evolution of the partnership.

He said Big Boy and Funko share in the proceeds from the sales of the NFTs but declined to break down financials. He said he expects the NFTs to be sold out within two or three hours after launching at 2 p.m. Aug. 31.

The company said it will not sell more after the first batch is gone. Those interested must create an account through Worldwide Asset Exchange to purchase the NFTs.

“Big Boy is such a part of American pop culture,” Blake said. “The younger audience might not be familiar, but their parents or grandparents might have a passion for it, and this is something that’ll bring them together.”