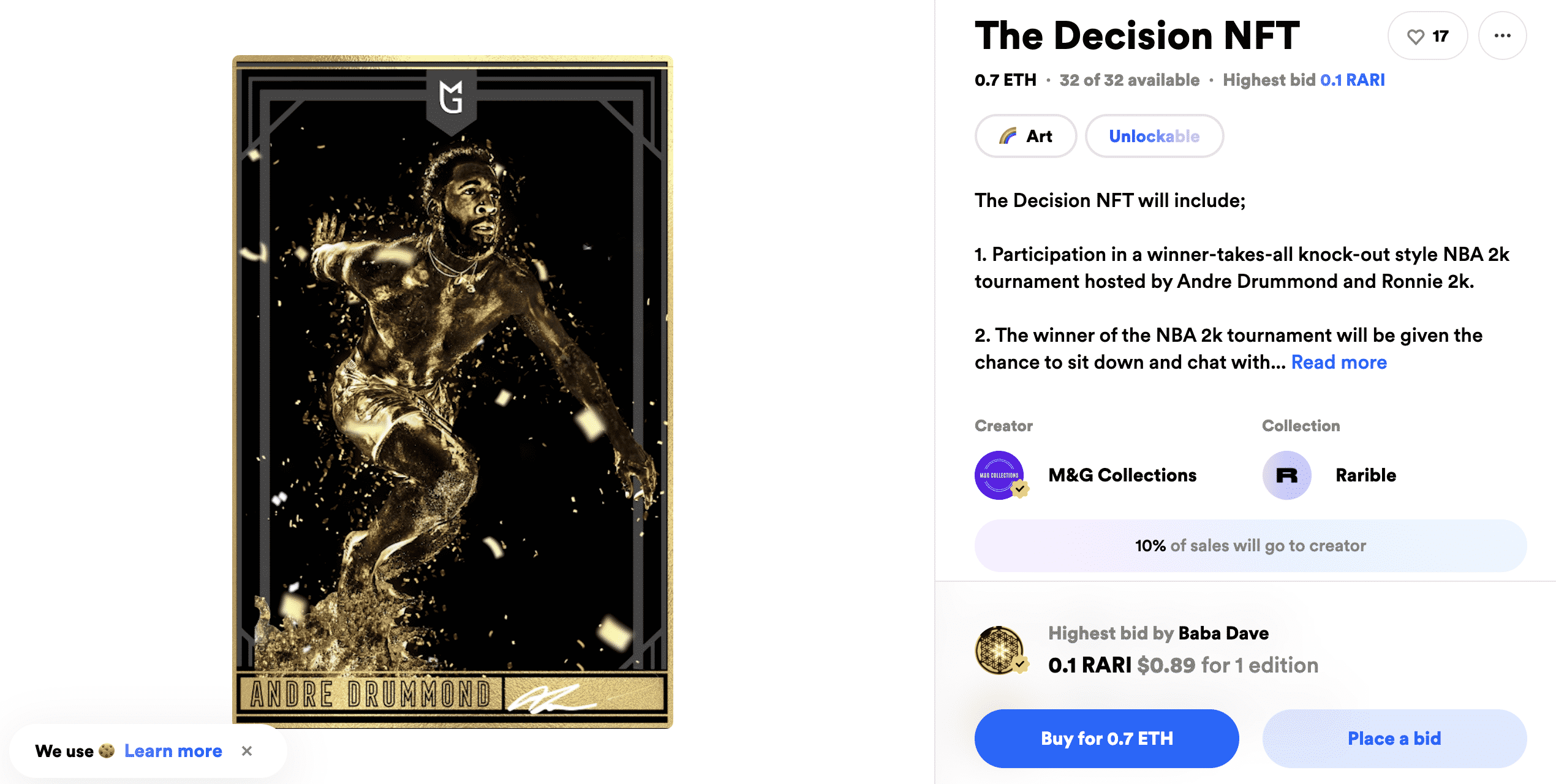 On July 6, the free-agent center made noise by criticizing Los Angeles Lakers head coach Frank Vogel on Instagram, spent that afternoon trolling on Twitter, then went on “The Jump” two days later to chalk it all up to strategic promotion for his four-piece non-fungible token set.

The next morning, Drummond hit Barstool’s “Pardon My Take” podcast and admitted to…drumming…up the NFT hype with his social media activity, though also kind of fessed to retroactively spinning it after calling one of his representatives.

“When I did that comment, I was like, ‘This is gonna stir up so much trouble,’” Drummond said about his viral IG shot at Vogel. “I called Mike, I was like, ‘Look what I just did.’ He’s like, ‘Alright, well this is good.’ I was like, ‘I know. I have people’s attention now. So now let’s capitalize on this.’ I kept going. So I went to Twitter and started a rant there. So then I was like, ‘While I got your attention, I’m dropping an NFT on Friday’…and the whole narrative changed.”

I’m sure everybody in the Lakers organization — currently determining whether to re-sign him — found Drummond’s marketing strategy deeply hilarious. Of course, per his own words, Shanghai always awaits.

Anyway, one week later, let’s check in on how his promotional efforts fared.

The Decision NFT features a digital trading card of a shirtless and bronzed Andre Drummond running and splashing through gold, with his signature encrusted. For this NFT, the prize is entry into a “winner-takes-all knock-out style NBA 2K tournament” co-hosted by Drummond.

If you win the 2K tournament, you get “the chance to sit down and chat with Drummond to discuss his off-season plans, career trajectory, and goals for next season.”

This NFT is decidedly Lakers-themed, which might be awkward. The design features Drummond, in a “Farewell” (his clothing line)-branded gold jersey, in front of the Hollywood Hills, with his name instead of the famous sign. The word “SHOWTIME” flashes across the top, with a penguin silhouette in the O. An image of him dunking appears in the background, as does his signature.

This token, which features Andre Drummond in a “Farewell” jersey flying towards the rim as palm trees go by, was posted on July 9. It’s selling for 0.099 ETH ($203.00). The winner here gets to own the NFT. Nice and simple.

The price and the number of copies (203) represent each of the jersey numbers Drummond has worn throughout his NBA career. So far, it has sold 1 of the 203 editions, to collector @Heaterboombeater.

According to the token designer’s website, the Golden Ticket was supposed to be auctioned in a free raffle on July 15. It did not go on sale.

We’ll see how the Kareem Abdul-Drummond merch does.