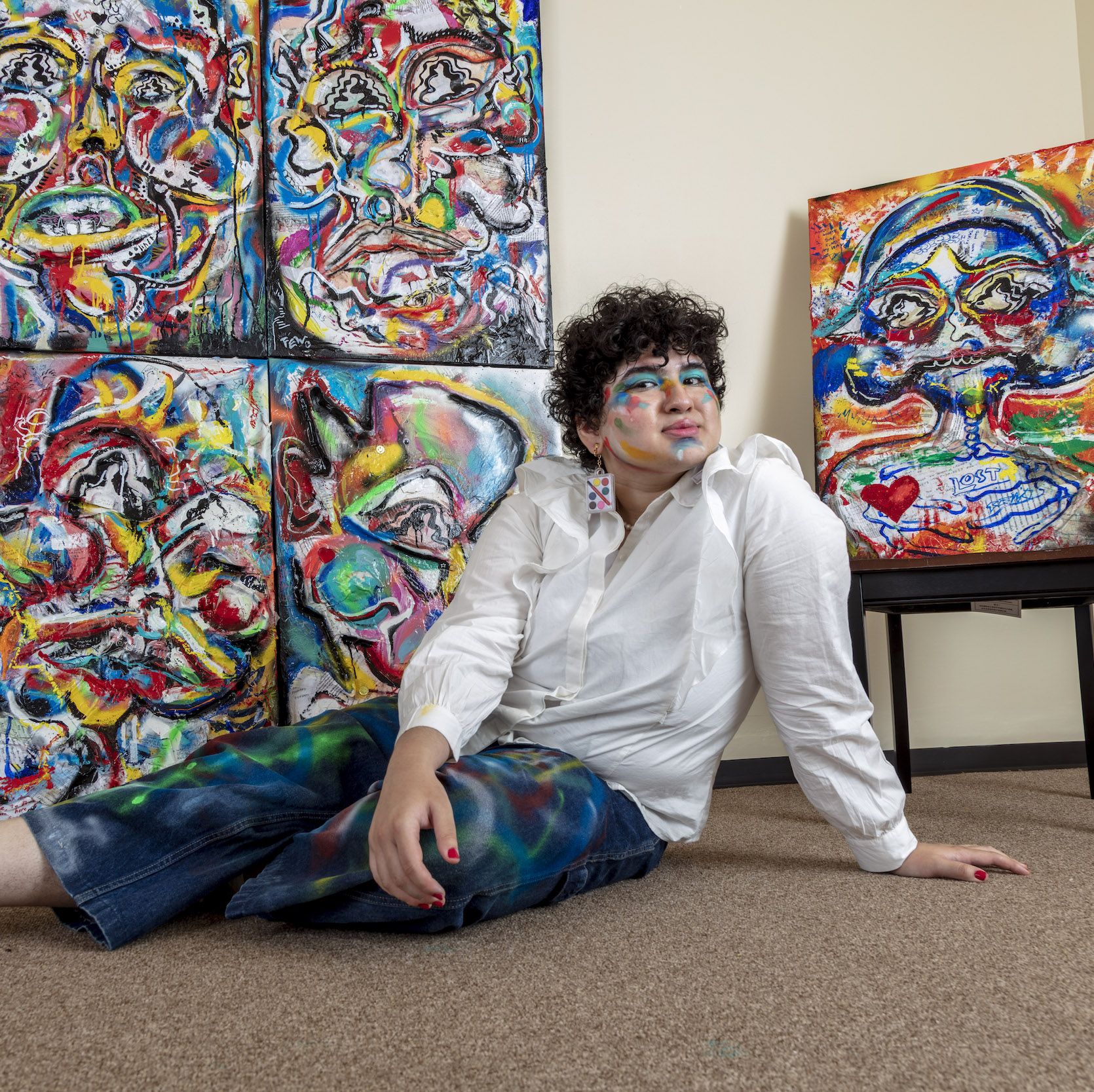 At approximately 10:00 AM EST time on June 23, 2021, the website for Christie’s, the legendary auction house, did something it had never done before: it crashed. Buyers flooded the site trying to place bids on a series of NFTs from an up-and-coming digital artist named FEWOCiOUS, and the traffic caused, as Christie’s put it, “issues.” As a result, the auction was called off and rescheduled for two days later because a queer artist, whose speciality is creating unique, digital files that are stored on a blockchain… broke the system. It’s all very 2021.

FEWOCiOUS, whose real name is Victor Langlois, is one of the most successful and visible members of a growing community of queer crypto artists who are finding success in the modern gold rush that is the NFT market—an emerging art space whose ownership rights aren’t physical, so much as they’re intellectual property. Just as it is with physical paintings, the value of an NFT is in its proof or origins and assertion of ownership. It’s the same difference between owning a print of the Mona Lisa and owning the actual, original Mona Lisa. It’s a multimillion dollar industry, and Langlois happens to be a bright spot in the middle of it.

Since breaking into the NFT market in 2020, Langlois has earned just under $18 million. His digital art work “The Everlasting Beautiful” sold for a staggering $550,000. Now he is the youngest artist ever to be featured by Christie’s and the first to crash its site—two incredible records that he reacted to in perfect, teenage fashion on a recent Zoom call: “It’s like… woah.”

The series that caused Christies to crash is called “Hello, i’m Victor (FEWOCiOUS) and This Is My Life.” It documents Langlois’ difficult childhood and gender transition across five digital and physical paintings. It is both a coming out story and a coronation—a crowning achievement for a young artist who fought like hell to arrive where he is today.

“I never really officially came out to anyone in the NFT space. I just changed my pronouns really fast and hoped no one noticed,” Langlois says. “So this is me being like, ‘Hello, I’m trans. This is what I went through in my life.’” And to have the platform for that very personal announcement be Christie’s—the art world’s biggest, most sophisticated stage? “It’s so insane. I’m mind blown,” says Langlois.

Langlois’ feet used to constantly ache. “I would walk on my tiptoes all the time because I didn’t want anyone to hear me,” he tells me on our Zoom call. By anyone, he means his grandparents. Langlois lived with them as a teenager in Las Vegas, after social service authorities removed him from his father’s abusive household. “I thought I would be safe, but they were just as mean,” Langlois says.

They didn’t allow him to leave the house for any reason other than to go to school. When he was in his bedroom, he had to leave the door open at all times. During his first year living with them, Langlois says he didn’t have access to the internet. With nothing else to do, he doodled to pass the time, first with Sharpies, then with a tablet after he realized his grandparents could see what he was drawing. “I started doing digital because I could hide it all under my chest,” he recalls.

After a contentious home life, Victor Langlois left home at 18 years old, bought a one way ticket to Seattle, and has been creating art to pay the bills.

And hiding was critical because, at this point, the questions Langlois had about his gender were too loud to ignore, and there was no telling what his Catholic grandparents would do if they found out he was openly examining his truth. Instead, he searched for answers in YouTube videos and found comfort in the online trans community. Stumbling upon videos of the model Chella Man was a particularly revelatory moment. “Seeing a model like a trans man be accepted as an idea of being handsome…” recalls a smiley Langlois. “I was like, ‘Whoa, that’s so cool. I’ve never seen that before.’ That gave me hope.”

Life changed for Langlois when he was finally allowed a phone. That’s when he created a Twitter account and discovered an entire community of digital artists. Stuck in his room all day, Langlois logged on and studied the competitive landscape, taking notes on how others managed to find success. “At first I had no idea what to do. I’m like, ‘there’s all these artists and people see them. How do I get there?'”

By imitating what he saw others do on social media and replying to as many artists’ posts as possible, he says, “Eventually, I built my own little platform.”

Ask Langlois what art means to him and he will answer in the plainest of terms: “I genuinely think it saved my life.” In his mind, it was his only way out of an inhospitable situation that was growing more hostile as he attempted to identify and embrace his transness. He was constantly met by his devoutly religious grandmother’s refrains:

God made man a man, and woman a woman.

You can’t choose. God made you that way.

Things were difficult away from home too. “Being at school, you see all the tall, handsome, cis boys, and all the girls are like, ‘Ah, look at him,” says Langlois. “And it’s like, ‘Wow, I’m here. And no one wants to talk to me or even knows that I’m Victor.’” To get through the brutal, endless days of high school, Langlois said he kept his head down and focused on drawing. “That was my safety blanket.”

Once he started selling a few of his prints online, Langlois realized art could be the key to escaping his unbearable surroundings. “At 17, I made a roadmap,” Langlois says. His plan was to make enough money to be able to leave home when he turned 18. For inspiration, he looked to Kanye West. “He just did so much that it kind of made him have to be successful because he just bothered everybody,” Langlois says.

Langlois’ NFT art has become a sough after commodity in the art world, selling for hundreds of thousands of dollars.

Langlois stumbled down the rabbit hole and into the underground world of NFTs in August of 2020 when a customer suggested he post an NFT on the site Superrare. Despite having doubts, Langlois took his advice and listed “i Always Think of You,” a surreal, Picasso-esque painting about a high school crush. It sold for a little over $1,000. Immediately after selling “i Always Think of You,” Langlois sold two more. He made $3,000 in one day. “It was a really lucky, good start,” Langlois says, before shaking his head as if to cross out the statement. He starts over. “It completely changed my life.”

The desperation Langlois felt as a young teenager, the isolation he experienced, and his desire to live freely as a trans man—they all show up in his art. They are in the psychedelic hues of his early sketches, and the many scribbled messages that pop up in random spots throughout his paintings.

“Don’t hide from me, little girl.”

“Am I pretty enough for you?”

Those phrases are scattered throughout “Year 2, Age 15 – My Mama’s Dream,” in Langlois’ Christie’s collection. There are hundreds more. “It really started as me being alone, and upset that I’m alone and journaling on the same page where I was drawing.”

Looking at the five coming-of-age portraits that make up “Hello, i’m Victor (FEWOCiOUS) and This Is My Life,” you get the sense that the artist is stuck inside a funhouse hall of mirrors. In the lower third of “Year 4, Age 17-His Name Is Victor” a pair of neon, flattened hands look as though they are pressing up against the portrait’s frame, trying to smash the glass that encases it. It is whimsical in the same way a nightmare is.

Langlois conceived of his Christie’s collection’s design himself. He tells me, “It goes from hiding, to accepting myself, and then realizing that I can just be myself.” The Christie’s website describes it as “his inspiring journey from Las Vegas to Seattle, and from Victoria to Victor Langlois.” Understandably, putting the whole thing together was an emotionally difficult experience. “How do you draw your life?” he asks aloud. “How do you draw being trans and what coming out is, and how that feels?”

On January 3, 2021—2 days after he turned 18—Langlois officially moved out of his grandparents’ house. A few weeks before his birthday he asked his grandpa to take him shopping for a suitcase. His grandpa was suspicious but obliged. The night before his planned departure, he stayed up until dawn packing. As per the rules, his door was wide open. At one point, his grandma walked past his room, causing Langlois to panic. “I was like, ‘Was she sleepwalking? Did she see that? I don’t know!’” Whatever she was doing, it didn’t foil his plan. At 1 pm the next day, after telling his grandparents he was leaving but refusing to tell them where he was going, he boarded a one-way flight for Seattle.

When I ask Langlois why he chose Seattle, his reason reminds me again of how young he is: “I liked how green it was.” But since settling in the Emerald City, he’s had to grow up fast. Nothing sheds youth’s innocence quite like becoming a multi-millionaire in a matter of six months. “I just learned about taxes,” Langlois tells me, nodding his head in disbelief. “They’re crazy!”

Nowadays, Langlois lives alone in a house that his friend and fellow cryptoartist Parrot helped him find. He loves having the whole place to himself. “The other day I got so excited, I just ran around my house!” He is embracing his newfound freedom by doing the simple things that were once forbidden. “I play my music so loud,” he tells me. At night, he stays up late chatting with other trans cryptoartists on Discord. At some point, he went back and bought all of the original paintings of artists he admired on Twitter. He even went on GoFundMe and finished off all of the top surgery campaigns he could find.

Get unlimited access to Esquire.com + a print subscription with Esquire Select.

But when I ask him what makes him happy, he repeats the question back to me. “What makes me happy?” He looks down and scans the ground, as if the right answer might be stuck in a crack between the floorboards. I hastily offer up a few examples from my own life. “I’m always really happy if I’m by the ocean,” I say. Langlois’ eyes brighten. He leaps forward in his seat. “I love the ocean!” he shouts, before diving into a story about visiting Malibu for a cryptoart conference. “We stayed at this hotel on the water. It was so beautiful. I cried. I was like, ‘I can’t believe I’m here right now.’”

Langlois can go anywhere now. The door is open. The difference is that it’s his choice.

Abigail Covington
Abigail Covington is a journalist and cultural critic based in Brooklyn, New York but originally from North Carolina, whose work has appeared in Slate, The Nation, Oxford American, and Pitchfork

This content is created and maintained by a third party, and imported onto this page to help users provide their email addresses. You may be able to find more information about this and similar content at piano.io