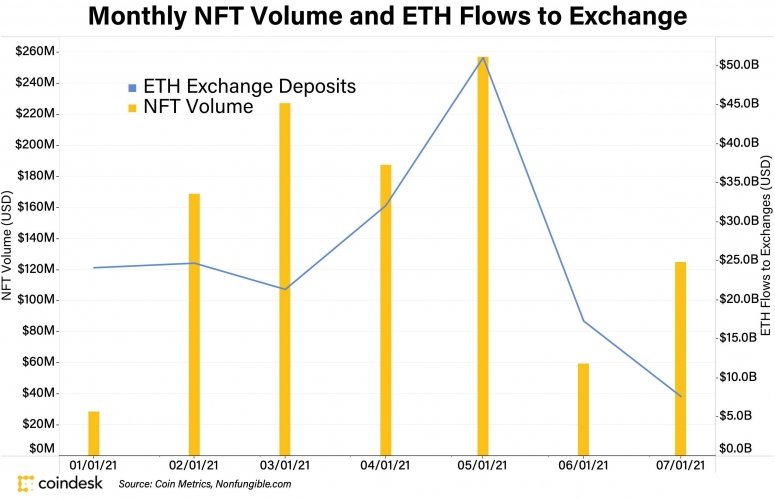 Not everyone’s happy with the rapid growth of the non-fungible tokens (NFTs), especially some people who are already inside the volatile crypto market for a bit longer time, aka, the “crypto natives.”

As NFTs gain popularity despite an overall bearish sentiment in the crypto market, some NFT critics inside the market took to Twitter blaming the non-crypto natives who cash out their ether immediately after NFT sales for the lackluster price movement of the second-largest cryptocurrency by market capitalization.

But according to multiple analysts and market participants, the impact of NFT sales, if any at all, remains a nonfactor on ether’s prices. Instead, the complaint showcases many traders and investors’ frustrations in a dull market.

The speculation “is more like a reflection of the current market sentiment,” Daniel Lv, co-founder of China-based blockchain Nervos Network, told CoinDesk through a representative.

The blame, though, isn’t completely irrational since growth in the NFT market has not quite slowed down partly because of the large number of endorsements it has received from non-crypto celebrities.

The sort of statement or action by non-crypto people like Mike Winkelmann, aka Beeple, only further legitimated the blame: Beeple, who received his record-breaking $53 million in ether (ETH) for selling his NFT through Christie’s, told The New Yorker that he converted ether into fiat, which was seen by the crypto industry as a “betrayal.”

“I’m not remotely a crypto-purist,” he said in The New Yorker interview. “I was making digital art long before any of this [nonsense], and if all this … NFT stuff went away tomorrow, I would still be making digital art.”

Meanwhile, data compiled by CoinDesk Research also shows that the monthly ether flow to centralized exchanges moved in tandem with the monthly NFT trading volume. A large inflow of ether or other cryptocurrencies to exchanges poses some pressure to their prices as more tokens are available for sale on the exchanges.

While all that is happening in the NFT market, ether, the cryptocurrency that is a main payment supporting NFT sales, is down about 50% from its all-time high price a little more than two months ago and is struggling to clear $2,000.

It’s worth pointing out that even when NFT’s monthly trading volume hit its highest level this year in May, the volume denominated by the U.S. dollar was still relatively small at around $250 million compared with the amount of ether deposited on exchanges at nearly $50 billion.

Only about 1.1 million ether went into NFTs this year so far, according to data compiled by blockchain data cite DappRadar.

“We’re far from the stage where ether prices are impacted by NFTs, regardless of non-crypto native sellers entering the space and potentially cashing out their ether,” Patrick Barile, chief operation officer at DappRadar, said via a representative earlier Thursday, citing that NFTs’ trading volume in the past 24 hours was only about 0.1% of ether’s.

That said, ether, alongside other alternative cryptocurrencies (altcoins), remains highly correlated with bitcoin, the No. 1 cryptocurrency by market capitalization, despite different fundamentals. When bitcoin gets hit, others follow.

“What we are seeing [in ether’s correction] is still a shakeout of new money that entered the space over the last half year,” Mosoff said. “Overzealous newcomers are being tested in their conviction that the asset class is truly here to stay.”