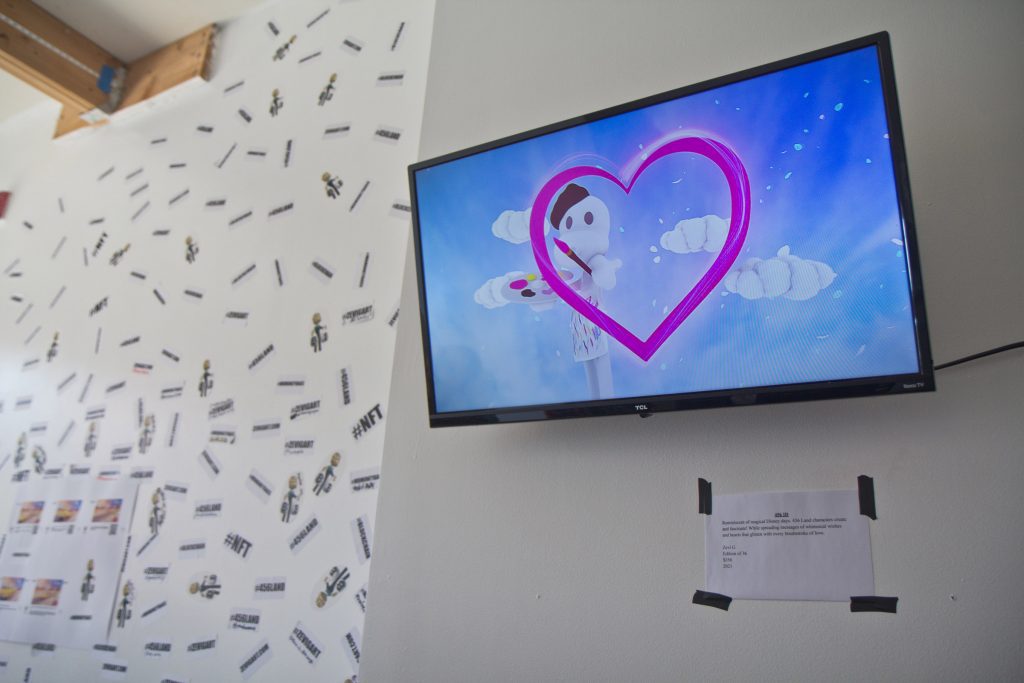 💌 Love Philly? Sign up for the free Billy Penn newsletter to get everything you need to know about Philadelphia, every day.

A space billed as Philly’s first NFT art gallery held its soft opening last week on a gentrifying block in Brewerytown. Prospective buyers were welcomed to a space where they could view artworks no one will ever take home — but can still pay to “own.”

The cryptocurrency venture, called Art From The Heart, is a partnership between high school friends Jay Ortiz, 29, and Darnell Schoolfield, 30.

Like the rise of NFTs, which have taken the art world by storm, the gallery’s launch at 2623 W. Girard Ave. moved fast. The duo signed a lease for the former yoga studio in mid-May, had a few talks with sculptor Zevi G, and turned around an exhibit in less than three weeks.

“This is like we in Silicon Valley,” gushed Schoolfield, who said he turned down a corporate job to join Ortiz’s venture as operations manager. “As I say all the time, we’re living in the future.”

The acronym stands for non-fungible token. They’re kind of like Bitcoin — most NFTs live on the Ethereum blockchain — but instead of being traded like currency, each NFT one of a kind. That means it can be bought and sold, like art.

NFTs can represent anything, from physical works to digital creations, even things that aren’t typically thought of as art, including memes or tweets. While the buyer of an NFT is awarded a form of ownership, they allow creators to retain rights, and potentially get paid over and over with each sale.

When Schoolfield first tried to invest in NFTs, he ran into gatekeepers he referred to as the usual suspects.

“I started looking into platforms and realized it was like a fucking club of people that wouldn’t really let you in unless they knew you,” The Jack Dorseys of the world, he said, referring to the founder of Twitter and Square.

Their Black and brown Philadelphia upbringings influenced their choice for Art From The Heart’s location, Ortiz said. They want to open up NFT wealth-building in an area whose residents they said may otherwise be left behind.

“A lot of this is a gentrified neighborhood, but at the end of the day, it’s still what Philly will consider the hood,” Ortiz said. “And I want to give people in this community an opportunity to do things or to even see things that would have never been here.”

During the soft opening, they hosted financial literacy scholar Dr. Boyce Watkins for a talk about NFT with artists Raf and Zevi G.

Four of Zevi G’s works were spread throughout the space, including a 4-foot sculpture called “The Messenger” whose physical price tag is $35,000.

Other Philly artists, including photographer Aaron Rickets and painter-designer Gianni Lee, have sold NFTs for thousands of dollars.

In its original incarnation, Art From The Heart was already pretty unorthodox.

After launching in Philly in 2017, Ortiz hosted interactive events at clubs and bars in Tokyo, London, and around the world. Guests would drink and mingle as body painters brushed colors on live models, fashion designers sewed creations onto runway strutters, and musicians played as illustrators sketched. At the end of the night, all the artwork was for sale.

The Brewerytown storefront will continue the multimedia theme. “This is not just an art gallery, this is a creative space,” Ortiz said.

In addition to more NFT events, the partners have lined up everything from a 30-person wedding to a paint-and-sip to a 3-hour pop-up chiropractic session. Said Schoolfield: “The possibilities are really endless.”