HONG KONG, July 02, 2021 (GLOBE NEWSWIRE) — TR Lab, a platform for discovering and collecting NFT art from the world’s leading artists, is pleased to announce its debut drop Transient Eternity—101 Ignitions of Gunpowder Paintings by the internationally acclaimed artist Cai Guo-Qiang. The NFT will be released through TR Lab’s online portal trlab.com at 9PM (UTC+8) on July 14, 2021, auctioned over a 48-hour period, and on display through August 14, 2021. The auction will be transacted in either US dollar (USD) or crypto currency Ethereum (ETH), parterning with leading crypto financial service providers Amber Group, and supported by Christie’s, Dragonfly Capital and ART021 Shanghai Contemporary Art Fair. Releted links on rockbundartmuseum 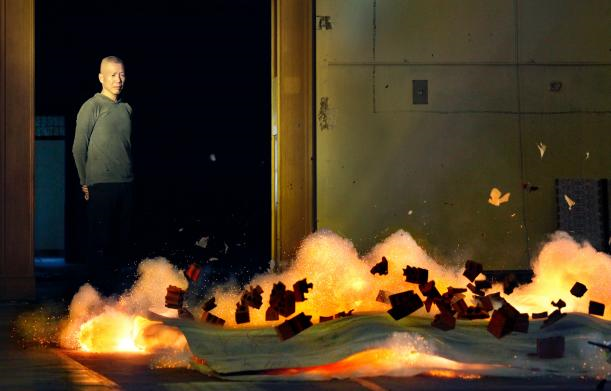 While Cai Guo-Qiang is most renowned for his explosion events using the sky as canvas—including the Footprints of History fireworks for the Beijing Olympics opening ceremony (2008), the conceptual fireworks One Night Stand over the Seine River in Paris (2013), and Sky Ladder (2015) realized in a small fishing village in his hometown—his most extensive usage of gunpowder as an artistic medium began when he started exploding it on such supports as canvas in 1984, thus establishing his unique gunpowder paintings.

Over the decades, Cai has exhibited at major museums across regions of the world and in different cultures, for which he has created and presented a large number of gunpowder paintings. Each painting endures a meticulous preparation process but the denotation happens in a blink, yet it is uniquely precious as the artwork’s moment of birth and mind-blowing in its intrinsic artistic charm. Regrettably, the impact of these moments has gone underappreciated, as focus often remains on the results of the detonation—paintings, sketches, computer renderings, photographs and video documentation—overshadowing the value, let alone the possession, of the moment itself.

Specially commissioned by Rockbund Art Museum on this unique occasion, Cai Guo-Qiang’s Transient Eternity transforms the “ignition moments,” a crucial part of the gunpowder paintings, to NFT. 100 ignition moments form a single NFT, while the 101st will be minted as an additional NFT—a small surprise for the NFT community. These moments all come from the pieces Cai created during his recent Individual’s Journey Through Western Art History. This Journey includes exhibitions at the Pushkin State Museum of Fine Arts in Russia, the Prado Museum in Spain, the Uffizi Galleries in Italy, the National Archaeological Museum of Naples and the Pompeii ruins in Italy, and the Solomon R. Guggenheim Museum in the U.S. Each project engaged with the chapters of Western art history embodied within those institutions, and, more importantly, reflected on the dilemmas and possibilities of contemporary art.

Cai comments, “Transient Eternity is the existence of the explosion moment itself —not the videos or photographs with which the ignition instant to be preserved in the traditional sense, or the physical gunpowder painting that was born from the ignition…Time and space at the instant of explosion become chaotic. Like the ‘Primeval Fireball’ that channels the birth of a new star in the universe, it is accompanied by piety, anxiety, and a sense of destiny anticipating the unknown. Each work’s detonation moment is unique, encapsulating the environment and climate of that time and place. It contains a shared divination of fate and the brief dislocation experienced by myself and audience… The project contemplates: Is it possible to create an art project with a more forward-looking vision, and with more compelling forms and concepts, by leveraging the core values unique to NFT technology?”

Larys Frogier, the director of Rockbund Art Museum, states, “In 2010, Cai Guo-Qiang transformed ‘low-tech’ inventions, handmade by peasants, into the art project Peasant Da Vincis. It debuted at Rockbund Art Museum before travelling to various institutions around the world, including CCBB in Rio de Janeiro, where it became the most visited exhibition by a living artist in the world in 2013. Over a decade later, the artist integrates the ‘high-tech’ nature of NFT with the moments of the birth of his gunpowder paintings to create another art project. The project poses the questions: What defines an artist’s work? What is an art project? It reflects on the questions surrounding the transience and eternity of the digital age symbolized by NFT, and the core concept of how value is stored. In the isolation age of pandemic and post-pandemic, the project aims to reflect on the weight of transient existence in the eternal river of time.”

Xin Li-Cohen, the Chairwoman of TR Lab, remarks: “We are privileged to collaborate with Cai Guoqiang in his first ever NFT. I’ve followed his artistic journey over the last decade and have always known Cai to be an artist who embraces innovation. We are ecstatic to join forces with Cai to spearhead TR Lab’s journey in bridging the art and crypto worlds.”

Marcus Fox, Global Managing Director of 20th/21st Century Art at Christie’s, comments, “Christie’s is proud to support our long-time colleague Deputy Chairman Xin Li-Cohen in this exciting entrepreneurial initiative, which dovetails with Christie’s own expanded offerings within the burgeoning collecting area of NFT art. We are also delighted to support Cai Guo-Qiang in this exciting application of NFT technology. Having worked with Cai to stage Homeland, the spectacular gunpowder drawing ignited in Shanghai in 2013 at Christie’s inaugural auction in Mainland China, we know first-hand the wonder of Cai’s ‘ignition moments’ which can now be immortalized as NFTs alongside the drawings themselves.”

“NFTs are revolutionizing the traditional art world. Artists can now monetize their work every time ownership of the asset changes hands on the blockchain”, says Annabelle Huang, Partner at Amber Group. “We expect to see NFTs being created in a variety of industries beyond art as well. As a leading crypto finance firm, Amber Group aims to provide tailored solutions for NFT trading platforms and creative artists entering the NFT world.”

Half of the auction proceeds will go to Rockbund Art Museum in support of the museum’s development and digital art research programs. The other half will go toward Cai Foundation, mainly in support of the Asian Cultural Council (ACC) Cai Fellowship Program, which funds young Chinese artists studying in the United States.