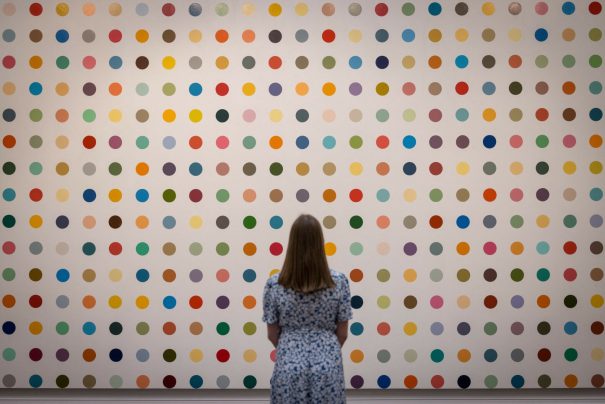 And yes, NFTs—the latest trend in modern art—may only further this disdain.

One of the artists who is absolutely the reason for this article, Damien Hirst, recently announced his own NFT, “The Currency.” Nothing unexpected here: Hirst will create 10,000 hand painted A4 spot paintings and, for each, a corresponding NFT. You pay $2,000 for the NFT and then have a year to decide whether you want to keep the NFT or the physical paper. Once you decide, the other will be destroyed.

The one thing that is surprising about all of this is that Damien Hirst got into NFTs this late. The crypto craze of 2020 and early 2021 is over, and it has dragged down non-fungible tokens (NFTs) with it too. NFTs saw the top of their hype at the beginning of this year, and for a while, it got so bad that lighting actual paintings on fire to then sell NFTs for a much higher price became a trend. (A company called Injective Protocol bought “Morons” by Banksy for $95,000, burned it live on Twitter and sold a digital version of this event as an NFT for $380,000.)

This is probably head-scratching for some of you, and it sure is for me. The idea is that NFTs are digital certificates on blockchain, a trace stored on blockchain that represents a digital copy of something. An NFT does not give you real ownership in a legally recognized way, hence there is a risk that the actual art behind the NFT could get sold separately, and so it makes sense to burn it to be on the safe side…right?

NFTs were really over-hyped earlier this year because of, well, blockchain. For a while, NFTs had won market approval. They had come to be recognized as the future of ownership because (your?) trace is stored on blockchain forever as opposed to within some central entity that keeps track of things. You bought an immutable record on blockchain of something, and no one can change it.

You can say that Damien Hirst is great and that he gets it, making technology part of his art. You could even say that he is damn clever, that he understands the controversy of valuable versus worthless that surrounds NFTs. He offloads the decision about that controversy on to people: Do you want the paper or a trace on blockchain saying you bought the paper (which then gets destroyed)?

Sure, but then I might say that there is this whole thing about Damien Hirst and money. Though the artist is now best known for his formaldehyde shark and severed cow heads, he was a leading figure behind the formation of the YBA (Young British Artists) movement in the 1980s, a largely undeniable part of which was due to his businessman personality and his understanding of what sells.

In 1988, Hirst organized an art show called Freeze that shocked and mesmerized the public, some of whom put it on par with Dada’s Cabaret Voltaire. An abandoned building in London Docklands was painstakingly (and not without injuries) transformed into an exhibition space occupied by odd items — a pile of crumpled metal by Sarah Lucas, a door painted by Gary Hume and light bulbs switching on and off by Angela Bulloch. At the entry to the exhibition was Mat Collishaw’s Bullet Hole — a photo collage on a lightbox which showed a head being fractured by a bullet. This was the age of low self-esteem, when kicking, screaming and vandalizing cultural symbols WAS art.

But kicking and screaming wouldn’t cut it. Freeze wasn’t interesting due to its shocking images but because the rich and famous came to visit. The high-class validated something outrageous. Working at a gallery, Hirst had the all-important art world connections. That and his salesmanship allowed him to attract the names that were needed—like the collector Charles Saatchi and curators of the greatest British galleries, Royal Academy’s Norman Rosenthal and Tate’s Sir Nicholas Serota—to make Freeze a sensation.

Damien Hirst is as much a businessman as he is an artist. And really, the only thing that is surprising about the news that Hirst has got into NFTs, is that it is this late in the game. NFTs are mostly a way to make someone pay millions for a digital footprint of pseudo-ownership of something that is available for free to everyone. The $2.9 million NFT of Jack Dorsey’s tweet is right here.

NFTs are absolutely perfect for the art world. Ever since art became modern, ever since old forms of art were considered to have lost their influence (like, making a Renaissance-style sculpture can no longer influence thinking of a modern man), there has been this low-effort conceptual teasing present in the art of artists pushing the envelope, testing how much is too much. Marcel Duchamp signed a urinal in 1917. Robert Rauschenberg erased a de Kooning drawing in 1953.

That envelope pushing eventually became about money. Salvador Dalí, an artist that was very openly fond of money, sold tens of thousands of signed blank sheets. Many after Dalí have done the same thing, escalating the joke until we got to bananas duct-taped to a gallery wall, which sold for $150,000 (several times). Selling worthless things to people for exorbitant amounts of money, while laughing in their faces for it, became integral to modern art.

This sort of makes sense. If you were a modern artist, the only more powerful and shocking thing than getting a conceptual joke accepted by an art gallery (Duchamp’s urinal in New York’s Grand Central Palace), is to have someone pay tons of money for it. That NEVER fails to make people interested, and oh, also, now you have everyone’s attention. Your artwork will be analyzed. It will have an impact.

Look, here it is:

There has been a mutual interdependency between art and money for centuries. Major masterpieces of the Renaissance were commissioned by (and the Michelangelos and Da Vincis of the time were sponsored by) the new emergent class of Italian bankers. Dutch old masters have flexed their genre to the liking of the fast-growing rich class of merchants.

The rich liking art had practical reasons, too. In monarchies, the wealthy constantly feared a sudden change that would uproot their business and make them an enemy of the state. Should the worst come to pass, jewelry and art were two sources of wealth that they could take in a hurry to emigrate to a safer country.

That explains why Russian oligarchs and ultra-wealthy Chinese keep buying art like crazy. And historically, that is nothing new (perhaps, except for the sheer size of the wealth inflow). What changed is that auction houses began operating like financial boutiques. (Why is it that every financial innovation has a bad aftertaste of a fraud?) Sotheby’s and Christie’s recognized that promoting contemporary artworks (as opposed to old masters) brings in a never-ending inflow of inventory, the prices of which can be hyped up to the benefit of all.

For the rich, art is an asset class like real estate, bonds or stocks. They need wealth planning around it. And so, auction houses changed to offer just that, offering collectors lines of credit and allowing them to borrow against the value of their collections. The result is that the prices for contemporary art keep going up, which attracts even more buyers, many of them drawn in by the potential for speculation and a better tax plan.

It has been shown before that the ultra-wealthy pay less in taxes, and art is an important part of this. Collectors and their advisors have always found creative ways to use their artworks to defer paying taxes, like borrowing money against the value of their art (to lower their taxable income), the establishment of tax-exempt private museums (to then deduct full market value of their art donated to the museum, even if it is next to their living room) or storing art in tax freeports (to avoid customs or VAT on its buying and selling).

You can see how this well-oiled money mechanism could prioritize some artists over other s— marketers over idealists. I am not saying it always must be like that. Some new-found artist could become big just by making very good jokes, but in general, it helps if the they understand the collective psyche — what the market wants.

When Damien Hirst organized his own auction “Beautiful Inside My Head Forever” in 2008, it was the same morning that Lehman Brothers announced its collapse. The excesses of Hirst’s auction, filled with 1,500 guests eating foie gras on golden leaves felt like the absolute top — a place from which the world was looking into the inevitable abyss. Walking away from the auction with $172 million, Damien Hirst didn’t look so good. Flooding the market with hundreds of his artworks, Hirst’s value as an artist came under criticism. But a few years on, the prices resurged and all looked well. The wealthy kept holding hands under Hirst’s art because they had too much money in. The number one rule of the contemporary art market: Prices have to keep going up.

You know what? That is also the rule of (in fact the only rule of) NFTs. JPEGs, often not even created by a human, are bought to be flipped for extremely short-term profit. Bored Ape Yacht Club — a collection of 10,000 NFTs available on OpenSea—have sold and traded for upward of a $100 million. Each picture of an ape is generated by a program using 170 unique traits. Prices start at 8.4 ETH (approximately $21,000). Remember, these are records on blockchain representing digital pictures (created artificially) that anyone can download a perfect 100 percent copy of. There isn’t even any pretense about it.

This is too hooligan even for Hirst.

Worth Knowing Worth Weekly

An indispensable guide to finance, investing and entrepreneurship.